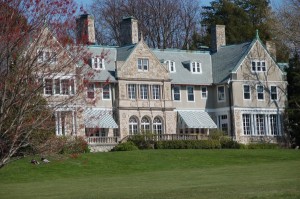 It may have been Friday the 13th, but the clear, sunny day only foreshadowed the wonderful day to come at Blithewold Mansion in Bristol, Rhode Island. Driving through the downtown as we approached the mansion, one can see that the seaside town of Bristol must be very popular in the summer months with its eclectic mix of shops, cafes, and restaurants.

I’m sure it was the ever-present view of the sea that drew Bessie and her first husband Augustus Van Wickle, a Pennsylvania coal magnate, to Bristol in 1896 to build their summer estate. Tragically, in 1898, Augustus was killed in a shooting accident, leaving Bessie with two young children. A few years later, she married Boston businessman William Mckee and continued to spend summers at the Queen Anne style mansion at Blithewold, hosting many parties. When the mansion burned down in 1906, they built the English Country style manor that you see today.

During the month of April, the grounds at Blithewold are awash in daffodils. It celebrates Daffodil Days with various events including afternoon teas, which my husband and I came to enjoy along with touring the house and gardens. While we were waiting to be seated, we watched home movies taken in the 1920s of the family and their friends enjoying a glorious summer day on the vast estate facing the sea. It was like a scene out of “The Great Gatsby” – everyone in their best summer finery with the young women in white lace-edged dresses skimming their calves in the new flapper style and the men sporting straw boat hats and wool flannel knickers (short knee pants). Like parents of any era, they adored their children as evidenced by a scene lasting several minutes of a six year old (a little bored with having to sit still for the camera) seated with two young toddlers dressed in white dresses with wide brimmed bonnets.

It was clear that this family not only had many friends and relations whose company they enjoyed, but that they were well looked after. As my husband and I were enjoying our tea of savories and sweets (delicious, by the way), we wondered how much staff would be needed to cook, clean, and care for the family as well as maintain the grounds and the mansion. I’m sure that between Blithewold, the neighboring estates, and other grand houses that a fair portion of the local community was gainfully employed in the upkeep of these residences and the care of its families.

Nowadays, if these estates are open to the public, they are maintained by a small staff supported with the help of many volunteers. In fact, it’s volunteers who are serving guests for this month’s afternoon teas at Blithewold.

After tea, we went on a self-guided tour of the rooms that are open to the public, which include several bedrooms, the living room, and dining areas. While this house is indeed grand with its fine furnishings, decorations, and features such as the fireplace brought over from the Duke of Cambridge’s house in England, it is very much a home. It was a house to be lived in and enjoyed by the family; a place to entertain graciously but not to be ostentatious.

Bessie’s passion for horticulture is reflected in the gardens and arboretum that she developed with the help of landscape architect John DeWolfe. The estate boasts over 2000 trees encompassing 50 species, including the Franklin Tree with its showy camelia-like white flowers in late summer, an impressive giant sequoia 90 feet high, and a large golden weeping willow that was in bloom on our visit. 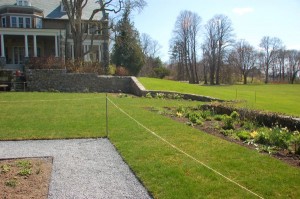 After leaving the house, the first garden we came upon was the North Garden originally designed as a formal parterre garden edged with boxwood. The boxwood suffered during storms in the early 1900s and low stone walls were built to define the garden, which cut down on maintenance. The beds, which border a groomed lawn, contain plants and shrubs that offer continuous color from late spring onwards. This garden is the setting for the many weddings that Blithewold hosts from May to October. 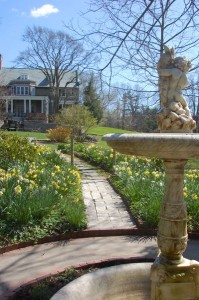 A gravel path turning to slate stone and then to white tile leads to a marble fountain whose cherub pours water into the surrounding small pool. This marks the entrance to the Bosquet, an airy forest of rhododendrons, ferns, myrtle, and other shade loving plants such as trillium. While the beds in the North Garden are for late spring and summer blooms, the beds surrounding the fountain and in the bosquet display a dazzling array of daffodils complemented with blue periwinkle. From the outset, John DeWolfe incorporated this area into the initial landscape plans for Blithewold given that it already was filled with trees such as ash, maple, and lindens. This bosquet was also used as a pet cemetery. A few of the trees have plaques commemorating Irish Terriers belonging to Marjorie Lyon, Bessie’s eldest daughter. 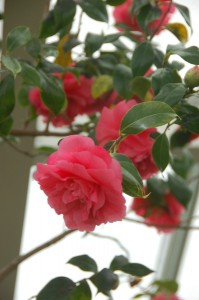 Continuing through the bosquet, we came upon the 1901 Lord & Burnham Greenhouse that was restored in 2005. We were greeted by a large camellia with the most perfect dark pink blooms. Other plants of interest were Clivia Miniata with its exotic orange blossoms, the 40-year old Calamondin orange tree, and the American Wonder Lemon with huge fruit and blossoms that smelled as sweet as frangipani. There was also an intriguing collection of succulent and cactus plants as well as a beautiful pitcher plant.

Just outside the greenhouse are the Display Gardens in which tulips were in bloom. It has a wide variety of perennials and annuals in interesting combinations that bloom throughout the season. 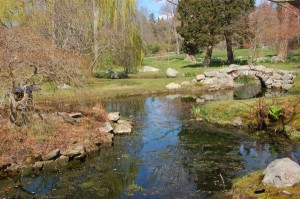 A walk through a bamboo grove leads the Water Garden, created in 1909. It features an arched stone bridge connecting two small ponds. In the midst of this Japanese style garden, is an island with a Japanese Maple and an ornamental pagoda. The garden also has Japanese cherry trees, in glorious bloom when we were there, as well as a golden weeping willow.

Adjacent is the Rock Garden, which Bessie created in the 1920s by having rocks brought up from the shore by oxen. There’s a constant bloom of low-growing plants that thrive next to the sea such as sea pink, corydalis, hosta, and geraniums; the white mountain rock cress and purple pasque flowers were in bloom during our visit.

Back at the Visitor’s Center at the entrance is the Rose Garden whose stone moon gate arch echoes that of the bridge in the Water Garden. We’d have to return in a few months to appreciate the pale pink blossoms of the centenarian Chestnut Rose that dominates this garden.

It was a spectacular day in all, walking in the footsteps of the Van Wickle-McKee family and experiencing the paradise they created. If you can, come to Blithewold for the Daffodil Days and enjoy an afternoon tea.

Also, be sure to check out the website www.blithewold.org for a complete description of the gardens, arboretum, house, and history as well as events offered throughout the year.

This entry was posted in Garden Events, Public Gardens. Bookmark the permalink.