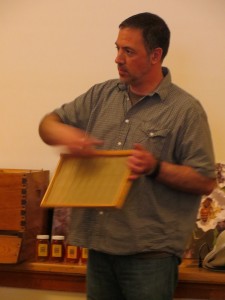 Tony Leluk is on a crusade.  He wants to help people understand what honey bees do for us and what we can do to restore their numbers and to protect them.  Tony and his wife Diane own Little Beehive Farm in Holliston, Massachusetts.  He travels all over New England to enlighten people on the importance of honey bees to pollination.  He held the rapt attention of members of the Manchester New Hampshire Garden Club at the Manchester Public Library where they hold their monthly meetings.

Tony started his presentation with a fascinating short video showing images of bees getting nectar from flowers and pollinating plants.  To view the full TED presentation, go to  http://www.ted.com/talks/louie_schwartzberg_the_hidden_beauty_of_pollination.html . To see a short clip of honeybee pollination, go to http://www.youtube.com/watch?v=7CdoBCEEpz4.

Eight years ago, honey bees started dying off in great numbers primarily because of what is known as colony collapse disorder.  There are several theories as to the cause.  One is that the nectar that the bees were bringing back to the hive was tainted with pesticides and consequently was killing the bees. Agriculture relies on the use of pesticides, which are nicotine-based, along with herbicides and GMO seeds to yield larger crops. These pesticides, which are made by the Monsanto and Bayer Corporations, last 12 years in the ground.

There is now a nationwide movement to use local farms that don’t use pesticides for our food supply.

Another reason for colony collapse may be the increase in diseases in bees as well as pests, such as the varroa destructor mite.  You could say the crisis began in 1987 when the varroa destructor mite attacked the honey bees and decimated their hives.  Beekeepers and farmers used chemicals to kill the mites, but the mites have since become resistant to the pesticide.

Other reasons for colony collapse include malnutrition from limited plant diversity, lack of genetic biodiversity, and toxins in the environment.  For more information on colony collapse disorder, you can view the video “Banishing of the Bees” at http://www.vanishingbees.com/ as well as a list of causes at http://insects.about.com/od/antsbeeswasps/tp/CausesofCCD.htm.

Did you know that bees pollinate 1/4 of the food we eat?

So crops must be pollinated to produce food. Each year 2,000 to 80,000 hives are put on trucks and brought first to the south to pollinate crops.  They are then trucked to farms across the country to pollinate various crops worth billions of dollars, such as almonds in California, cranberries in Wisconsin, and then back east to pollinate blueberries in Maine.  While this is addresses the problem of pollinating crops, in time it weakens the bees because it is not a natural way for them to live.

What Can We Do?

So part of Tony’s crusade is to motivate farmers, gardeners, and anyone else concerned about the supply of honey bees to take up beekeeping or help support local farms by purchasing honey from them.  He recommended watching the Michael Pollen movie, “Queen of the Sun.”  This documentary shows exquisite scenes of bees in their hives and pollinating flowers.  It interviews beekeepers from around the world from Illinois to Italy to New Zealand and even to the rooftops of Manhattan.  It urges us to not only be aware of the problem, but tells us what we can do about it.

Tony pointed out that while one beekeeper with a hive of 60,000 bees can’t make much of an impact, 60,000 beekeepers with one hive each can make a significant difference.  So how can we as gardeners make a difference?

Because of public awareness of the problem, there has been resurgence in the number of beekeepers in this country.

Did you know that beekeepers in general get better vegetables and berries from their gardens?

And feral bees are coming back.  These are European honey bees that can be found in holes in the sides of trees and stumps as well as in between walls in old barns or houses – anyplace that provides protection from the elements. Or they may build a free-hanging nest high up in a tree in warm climates (the hive wouldn’t survive the winter in a cold climate like New England).

In Europe and America, the species managed by beekeepers is the Western honey bee, which has several subspecies such as the Italian bee, European dark bee, and the Carniolan honey bee.

There are three castes of honey bee in a colony or hive: the queen, the workers, and the drones. 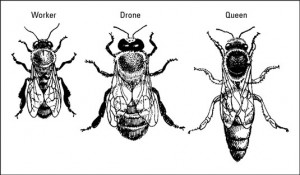 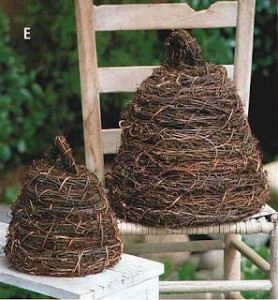 Beekeeping, or apiculture, which has evolved over the centuries, is the management of honey bees, which live in large colonies of up to 100,000 bees.

Evidence of beekeeping goes as far back as 2422 BCE in Egypt and can also be found in prehistoric and ancient Greece, Israel, ancient China, and the Mayan peninsula.  Evidence includes hives made of straw or twigs (skeps) and unbaked clay as well as equipment such as smoking pots and honey extractors. Beekeeping was an advanced industry providing income from honey and wax even as far back as 3000 years ago in ancient Israel.  In ancient Greece and Rome, beekeeping was documented by writers such as Aristotle and Virgil.  And you can see hieroglyphics of honey production in the tombs of ancient Egypt.

For thousands of years, honey was originally collected from wild hives in trees and rocks.  But to get the honey, the hives were destroyed and new ones were sought. So it wasn’t a very efficient system long term. 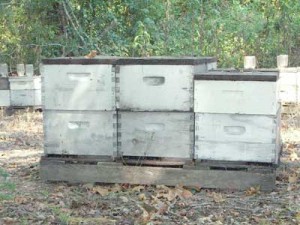 The 18th century saw the move to a movable comb hive, which was perfected by Lorenzo Langstroth in America in the 19th century.  This consisted of a rectangular hive box with a series of wooden frames that were spaced 1/4 to 3/8″ apart.  This is known as the bee space, which bees do not block with wax and use to move about the hive. 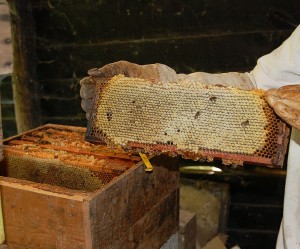 So the bees build parallel honeycombs in the box that do not touch each other or the walls.  This way the beekeeper can slide any frame out for inspection or harvest honey without harming the bees or the comb, which contains the eggs, larvae, and pupae.  Variations of this system are used today throughout Europe and the United States. 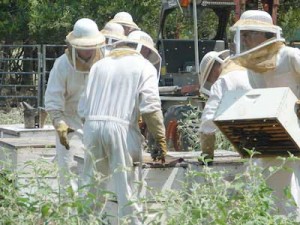 Beekeepers wear protective clothing including gloves, a hooded suit or hat and veil with a long-sleeved shirt that are all light colored. Don’t wear black because the bees often go to objects with this color to sting.

Other equipment includes a bee smoker which generates cool smoke to calm bees and to mask alarm pheromones released by guard bees.  This makes it easier for beekeepers to open the hive and work without triggering a defensive reaction.

Honeycombs in the hive are created mostly by young bees who create cells from wax that they secrete.  One or two of the cells are queen cells in the center of the face of the comb; the queen from one of the cells will supersede the old queen who either dies naturally or is killed off.  This is the method used most by beekeepers rather than swarming where many queen cells are created and another hive is created in the hollow of a tree or rock crevices.  The entire swarm moves to the new hive stocked with honey from the old hive.

How Do Bees Make Honey?

You can see this process in the YouTube video at http://www.youtube.com/watch?v=x7cX2cjFunw.

In the commercial beehive, the most common being the Langstroth hive, the honey is collected in the honey supers, which are the frames hung in the hive.  The bees build the honeycomb on these frames.  When the honeycomb is full, the bees cap the comb with the beeswax.

Did you know that one beehive can produce up to 100 lbs. of honey? One frame produces 3 to 4 lbs. of honey.  The honey is 25% moisture and needs ventilation to reduce the moisture to 18%.

The color of the honey is determined by the plants that the bees feed on.  So a witch hazel plant produces light colored honey where as goldenrod produces a dark amber honey.

There are also special brood chambers in the hive where the eggs, larvae, and pupa develop.

Tony says only buy local honey and don’t cook it.  Honey contains powerful antioxidants with antiseptic and antibacterial properties.  Its medicinal benefits have been have been used for centuries.  Some remedies include:

Honey bees are also used to treat arthritis, which is known as “bee string therapy.”  There are practitioners who specialize in this.

For more benefits, go to http://www.doctoroz.com/blog/lindsey-duncan-nd-cn/honey-s-unknown-benefits.

To get started beekeeping, see www.thedailygreen.com/environmental-news/latest/diy-backyard-beekeeping-47031701#slide-1, which gives an overview of the process.

This entry was posted in Garden Lectures, Garden Workshops & Courses. Bookmark the permalink.

One Response to Saving the Honey Bees