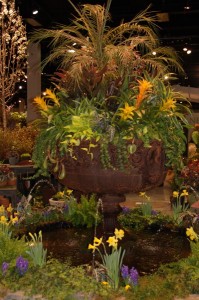 Probably the last time I went to the Boston Flower & Garden Show it was at the Bayside Expo Center.  It’s been many years.  On Thursday, I drove into Boston to the Seaport World Trade Center and arrived around 10:15 when the initial mad rush was over, so the drive, parking, and buying a ticket was easy going.

This part of the city is much nicer than I remember it.  The layout of the trade center was easy to navigate although for a week day, the crowd was sizeable.  Hate to think what the weekend was like!  But gardeners are a nice crowd and very polite.

The theme of this year’s show was:  “A Burst of Color: Celebrating the Container Garden.”   Container gardening in the past ten years has expanded from just a few flower pots on your deck to large containers displaying sophisticated combinations of annuals and perennials, spanning the seasons on your deck or as part of your landscape.  It can also allow you to have a vegetable garden when you don’t have the room or perhaps the time or energy for a traditional garden.

The show included over 25 display gardens created by the area’s top nurseries, landscapers, professional florists, and horticultural associations. The gardens each featured at least one focal container of some kind, such as a topiary, raised beds, built-in planters, or unusual items used as containers (i.e. garbage can).  Lectures and demonstrations offered planting tips and design ideas for fruit, vegetable and ornamental containers.

Several rooms near the main trade center floor housed the creations of the region’s top amateur floral arrangers.  Their colorful and often innovative arrangements were coordinated and judged by the Massachusetts Horticultural Society and the Garden Club Federation of Massachusetts.

I attended three lectures and a demonstration, which I describe below.

Roger Swain hosted the PBS show The Victory Garden in the 1980’s and 90’s.  He has written several books on gardening and is the co-host of the television show “People, Places, and Plants” with Paul Tukey on HGTV at 7 am on Sunday mornings.

Paul Miskovsky is owner of Miskovsky Landscaping in Falmouth with decades of experience and winner of numerous awards from regional flower and garden shows.  His website is www.miskovskylandscaping.com . 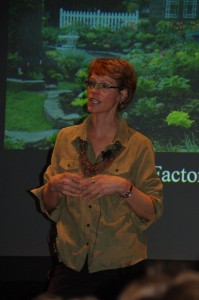 Kerry Mendez is owner of a garden installation and consulting business, Perennially Yours, which focuses on gardens in zones 3 – 5.  She is the author of two gardening books and numerous articles.  Her website is www.pyours.com .

Roger Swain began the Question and Answer session by saying that the best way to learn about gardening was from other gardeners and encouraged the audience to attend a Master Gardeners Program.

Most of the questions centered on how to get rid of pests, such as insects and invasive plants.

Question: How do you trim a butterfly bush?

Question: How can you get rid of the Red Lilly beetle, which destroys Asiatic lilies?

Question: What’s an organic way to get rid of Creeping Charlie that is taking over a lawn?

Question: How do you get rid of Vine Weed and other invasive plants such as Bishop’s Mantle?

Both these are available at her website, www.pyours.com, and probably Amazon as well.  I looked through these books at the show’s bookstore and they both looked excellent – entertaining and informative as well as easy to read.  They’re the kind of books you can flip through and find useful tips no matter which page you land on.

Kerry said she likes to get the most from each plant in her garden by making sure that each one offers at least two seasons of interest, such as flowers in the spring and interesting foliage for summer.

She said it’s important to replenish garden soil each year by:

It’s also good to divide plants so they don’t crowd out an area, to expand the garden in other areas or to share with others.  For spring-blooming plants, divide after they’ve bloomed.  For summer and fall bloomers, divide in the spring, before they bloom.

She then went on to discuss 43 perennials that she considers new, unusual, or underused.  These probably can be found in her books or on her website.  Here are five that looked interesting:

The White Flower Farm in Litchfield, Connecticut grows 800 species of plants in over 30 greenhouses.  They are a mail order as well as retail business.  Each month their 300 foot border displays a different swath of color, such as purple (hyacinths) in May which then turns to white (wisteria, iris) in late May depending on the temperature.  Barbara thinks focusing on a particular color in a season adds drama and impact.

She discussed nearly thirty plants for container gardens that she thinks will be top sellers for 2011.  Here are ten:

Cheryl Collins has been a freelance photographer for almost 30 years and was state photographer for the Garden Club Federation of Massachusetts for 6 years.  She lectures to garden clubs throughout New England. 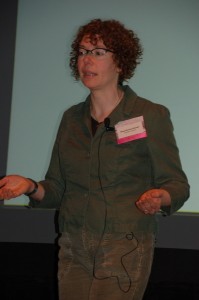 Meg Muckenhoupt is author of Boston Gardens and Green Spaces.  She edits the Belmont Citizens Forum Newsletter, and has written for Boston Magazine, the Boston Globe, and the Boston Phoenix.

Meg packed a great deal of information in a short amount of time.  She loves history and has covered this topic comprehensively in her new book.  Here are some interesting facts she revealed in her talk:

Landfill began in 1795 with the creation of wharves on Boston Harbor.

In 1847, 37000 Irish immigrants arrived.  Wealthy Bostonians started running out of land.  In 1852, the Back Bay was created for them using landfill, such as gravel and old bottles as well as soil from three mountains – Tri Mountain area – that is now Tremont Street.

In the Back Bay, the broad tree-lined boulevards and mansard roofs of buildings on the Commonwealth Avenue Mall was inspired by Paris of the 1860’s and were designed to attract the wealthy.

The Mill Dam was built in 1910 to harness the power of the tides that flowed in and out of the Charles River.

Frederic Law Olmstead designed the Back Bay Fens and Franklin Park.  He created Franklin Park for the ordinary working citizen to escape the stressful life of the city.  It once had sheep.

The Fenway Victory Gardens were created from soil dug out to create the Park Street Station.

Piers Park, which opened in 1995, was created, in part, to compensate the East Boston community for the destruction of their park in the 1960’s when Logan Airport was built.

Millenium Park in West Roxbury was created from soil from the Big Dig.  It is popular with birdwatchers.

This entry was posted in Garden Lectures, Garden Shows. Bookmark the permalink.