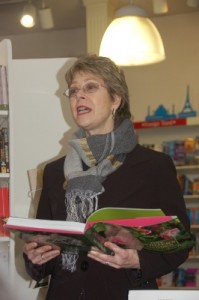 On Saturday the 21st, I went to the Toadstool Bookstore in Peterborough, New Hampshire to hear Jane Roy Brown discuss a book she coauthored with Susan Haltom called One Writer’s Garden. It’s about Eudora Welty’s garden at her home in Jackson, Mississippi and how this garden inspired and influenced her writing.

Eudora Welty wrote numerous short stories and novels about the American South and won many awards including the Pulitzer Prize, the Presidential Medal of Freedom, and the National Medal of the Arts. Some of her most well known works include the short story collections A Curtain of Green and The Golden Apples. She won the Pulitzer Prize for her novel The Optimist’s Daughter in 1972.

She was born in 1909 and grew up in a house on North Congress Stree in Jackson with her parents Chestina and Christian Welty and her two younger brothers Edward and Walter. Then in 1923, her parents built a large Tudor Revival home on Pinehurst Street in Belhaven, the first suburb of Jackson. It was built when Jackson’s population was growing rapidly and the extension of trolley lines made it possible to live further out from the city. Not that the Weltys needed the trolley since they were of the minority that owned a car. Christian was vice-president of an insurance company.

Even before they moved into the house, Chestina was envisioning and planning their garden. She designed and planted the garden over a number of years primarily between 1923 and 1940. Her garden design was inspired by the Colonial Revival style popular in the 1920′s, which emphasized square or rectangular beds, straight pathways, and floral borders enclosed by hedges, arbors, and trellises. It created the effect of outdoor rooms as an extension of the home. A good example of this in New England is the garden at the Hamilton House in South Berwick, Maine, which I visited last July.

Chestina was influenced by garden writers of the time such as Helena Rutherford Ely who advocated gardening as a way to improve physical and mental health at a time when there were rapid technological developments and the pace of daily life was becoming hectic. Chestina learned a great deal from books and belonged to local woman’s clubs and garden clubs, which she often started or headed.

She was part of a movement at that time in which women started garden clubs as an outlet not only for their interest in gardens, but as a way to contribute to civic life. They spearheaded efforts to beautify rapidly growing suburbs by getting city officials to build parks and line city streets with trees. On their own, they often planted flowers and shrubs in median strips.

The book does an excellent job of describing the social history of the early twentieth century with an emphasis on the development of gardening, garden clubs, and the effect of the times on women and families. This is interwoven with the story of how Chestina developed the garden and involved Eudora in her gardening endeavors. Chestina imparted her considerable knowledge of botany and gardening to Eudora, who in turn used this knowledge to enhance character descriptions in her stories.

During the Depression, Eudora worked for the Works Progress Administration (WPA) as a reporter writing news stories and taking pictures for county papers throughout Mississippi. From this experience came the novel Losing Battles in which she used her knowledge of plants to describe the life of her poverty-stricken characters. For example, the flowers that grew around the modest home of the family in the novel were cannas, montbretias, red salvia, lemon lilies. The mix of hot colors of red, orange, magenta, and yellow as well as the fact that the cannas were grown in rows (“like the Walls of Jericho”) suggest an uneducated eye. The plants were inexpensive, but hardy and required little care. Cheap morning glory vines provided shade for the porch and sections of concrete pipe were used as planters for verbena. Although the family is poor, their garden evokes a feeling of abundance, which is reflected in the richness of their family life.

One Writer’s Garden also provides examples of Eudora’s references to her garden and plants in her correspondence to friends who shared her interest in gardening. Most of the examples come from letters to her friend and agent Diarmuid Russell and to John Richardson with whom she had a romantic relationship until the 1950′s. The examples show how much the garden meant to her, providing comfort and solace during some very difficult times, such as during World War II and when her mother became ill after the war.

As Chestina became more infirmed during the 50′s and 60′s (she died in 1966) and Eudora traveled more for her career, the garden fell into disrepair. By the 1990′s, the garden in its original form was unrecognizable.

In 1994, Susan Haltom met Eudora and received her permission to restore the garden. Although Susan had some help, she did most of the restoration herself, sometimes digging as much as a foot deep to find the original bricks of the garden path! Susan gathered most of the information she needed to restore the garden from interviews with Eudora as well as from Chestina’s garden journals and Eudora’s photographs of the garden in the 1930′s. The Garden Conservancy also guided Susan in preserving the garden accurately. In 2001, Eudora died at age 92. The garden was opened to the public in 2004.

The peak months for visiting the Welty home and garden are March and April when many of the plants are in bloom, especially the camelias, which were Eudora’s favorite. There are also many varieties of roses, which were Chestina’s favorite. Many beautiful color photographs of these plants and more can be seen throughout the book, which also includes photos of Eudora, her family, and friends.

I highly recommend this book to anyone with an interest in gardening or Eudora Welty or both! I plan on reading more of her stories to understand how her passion for gardening infused her writing and to just enjoy her storytelling. And it sure would be wonderful to visit her home and garden in Jackson, Mississippi. Someday soon I hope.