I think it was a record turnout for Mother’s Day at Tower Hill Botanical Garden in Boylston, Massachusetts. The traffic was backed up at the entrance by one o’clock. But it was well worth the wait given the glorious weather.

Then in the 1980′s, John Trexler looked at over twenty sites to find a new home for the society and found it at the Carter estate, whose owners wanted it to remain in its natural state, free from development. The society purchased the 132-acre property for $675,000 and moved to the site in 1987.

It’s now halfway through its fifty year development plan having completed its education and visitor center, various garden areas, and buildings that house plants over the winter: the Orangerie and the Limonaia. With its bucolic setting and views of Mount Wachusett and the Wachusett Resevoir, Tower Hill is a popular venue for weddings and other special events. 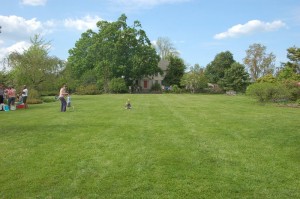 Displaying over 350 varieties of trees and shrubs, the two-acre lawn garden blends into the hillside and creates a natural privacy. For special events, it can accommodate up to 1200 people. When we visited, many of its 6,000 spring bulbs were in bloom.

Some of the garden’s distinctive trees include witch hazel trees that provide color in January and February with their pink or white blooms. There’s the ginkgo tree that is the oldest cultivar in the U.S. The seven son flower tree is a Cary Award winner that features fragrant white blossoms in August and leaves that turn purple for the fall.

The Cary Award commemorates the work of Edward A. Cary, a nurseryman who was known for his unusual collection of plants that most people believed could not survive the harsh New England winters. When he died in 1987, he left his estate in Shrewsbury to the Worcester Horticultural Society. Ten years later, the Society created the Cary Award for Distinctive Plants in New England to promote the cultivation of under used plants that Edward Cary admired.

Like any other garden, Tower Hill has its pests to contend with. When the deer began feasting on their Weeping Alaskan Cedar trees, the staff sprayed the branches with garlic water as well as hanging tubes of garlic water from the branches. It seems to have worked.

The brick walkway leads to two pergolas at the southern end of the lawn garden, overlooking the Secret Garden below. Meant to titillate the senses, this sunken garden laid out in semi-circle form has statues representing the four seasons, a ram’s head fountain spewing water into a pool, a variety of fragrant and colorful herbaceous plants across the seasons, and stone benches on which to sit and take it all in.

Down the hill from here is an apple orchard with 119 varieties of trees, some of the oldest being the Benoni apple tree from 1832 as well as the Pumpkin Russet. You can taste many of these rare varieties at Tower Hill’s harvest festival in October.

Leaving the Secret Garden and walking up the east side of the lawn garden, you come upon the vegetable garden managed by Dawn Davies who offers visitors a complete list of vegetables grown here. In summer, the archway is covered by two prolific Isis cherry tomato plants producing more than 6,000 tomatoes!

A path from the vegetable garden brings you to the Limonaia or Lemon House, an indoor garden with a greeting over the doorway, “Festina Lente” – or make haste slowly, which was a popular refrain of John Trexler’s. The exolite glazing covering the arched wooden beams controls the amount of heat and light that enters the building. The Limonaia, whose plants adorn the Winter Garden courtyard during the warm weather, is also an area for social functions.

Exiting the Limonaia, you enter the Winter Garden, which is reminiscent of an Italian garden with twin bronze turtle fountains spouting water into the rectangular pool. The turtles were specially created for Tower Hill by the New York City sculptor Priscilla Deichmann. In winter, this protected garden area showcases trees and shrubs that thrive in winter and are joined by warm weather plants from the Limonaia and Orangerie in summer. A semi-circle of Knock Out rose bushes form the western boundary of this garden. Future plans for the west side of this garden include a restaurant overlooking gardens and orchards.

The Orangerie, which forms the north boundary of the winter garden, greets you with a Latin saying meaning “If there is heaven on earth , this is it.” Need one say more about this 18th century style greenhouse that must be a glorious respite in winter.
On leaving the Orangerie, children delight in the porous volcanic-like stone fountain that sprays a light mist on those nearby and is home to many mosses that like the moist environment. It’s actually Castilia Stone, a sedimentary rock from farm fields once part of Lake Erie in Sandusky County, Ohio.

This fountain overlooks the Systematic Garden featuring 26 plant families with each bed showing specimens from the oldest in New England to the newest. Did you know that the Rosaceae family includes strawberries and raspberries as well as roses?

Protecting the Systematic Garden on the east side is Pliny’s Allee, a grassy avenue flanked by trees, planted in memory of a sergeant killed in World War II. This allee leads to a fountain as well as the Belvadere Overlook where you can enjoy views of Mount Wachusett and the Wachusett Reservoir.

That was enough for me to enjoy this day, but other areas to explore on future visits include the Wildlife Garden and a 1 mile-long Loop Trail that leads you to the Inner Park and Wildlife Refuge Pond as well as the Folly and The Moss Steps. I also plan to attend some of the many events and workshops that are offered here year round.

And many thanks to my husband and son for treating me to this lovely day!